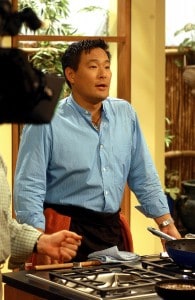 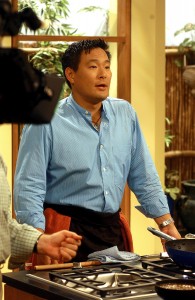 Unlike many shows, it is not a “competition,” rather more a friendly, fun collaborative food adventure with Chef Ming and his guests exchanging ideas, tips, stories and good humor. Watching Ming and the talented team assembled by WGBH, the show’s originating station, crank out three episodes a day is a lesson in cooperative creativity.  The precision which the preparation kitchen crew and the television production team exhibit is a testament to their professionalism and a treat to watch.

After completing the cooking segments at Clarke, Team Simply Ming headed to the wine producing areas of California then on to Singapore for more exciting adventures!  The new season will premier in October.

We can’t wait for next summer when they return to Clarke to film season number ten! However, before that, Ming will be offering one of his great cooking classes at The Clarke Culinary Center in Milford…watch www.clarkeculinarycenter.com for details!