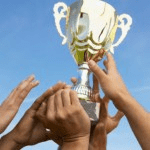 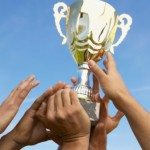 The Nova Scotia Home Designers Association has one. So does the Tidewater Builder’s Association in Virgina Beach and the HBA of Greater Dallas. In fact, Kraus Fitch Architects of Amherst, MA won one at the 2011 Annual Conference of the New England AIA for Two Pond Farm in Williamsburg, MA.

Now Clarke has one too. It’s a People’s Choice Award. For the first time ever, Clarke has taken its Clarke Kitchen Design Contest one step beyond industry judges in the glass-walled conference room and asked the people of New England which of the magnificent kitchens would be their winner for most beautiful kitchen utilizing Sub-Zero and Wolf appliances.

More than 50 entries were submitted by architects and designers from all over New England. In the first 24 hours after the voting opened this week, there were more than 600 votes. “The people” can only vote once. And only one kitchen can win.

The process got me thinking…how did “People’s Choice” awards start anyway? In this election year, we take these democratic tools for granted. It seems like the term “People’s Choice” is so much a part of our culture that it always existed. But, with a little research, I realized that the term, “The People’s Choice Award,” really started being bandied about after the first People’s Choice television show aired in 1975, created by Bob Stivers. The show has been produced every year since then and airs on CBS. It started in America and now is emulated in many places around the world for many things beside actors and favorite shows…that’s how much we humans love to vote for our favorite anything and find out if the crowd agrees with us. 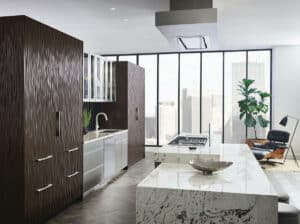 The show has always been produced by Procter & Gamble and they bought the show from Stiver, the creator, in 1982 . Looks like the very first awards recognized The Sting as 1974’s Favorite Picture, Barbra Streisand as the year’s Favorite Film Actress, and John Wayne as its Favorite Film Actor. Ratings for the annual event peaked in 1977, when the 3rd People’s Choice Awards attracted 35.3 million viewers who witnessed Farrah Fawcett-Majors win for Favorite Female TV Star, Star Wars win as the Favorite Picture, and Streisand and Wayne win again in the Film Actress and Actor categories.

The Clarke People’s Choice Award for Kitchen Design will close on March 15th and the winner will be announced on March 29th by 10PM. It will be interesting to see if New Englanders choose the same traditional or contemporary kitchen that the industry judges in the glass conference room at Clarke find superior.

Find out if the region agrees with your selection…believe me, it’s a tough choice. Vote today by clicking here.