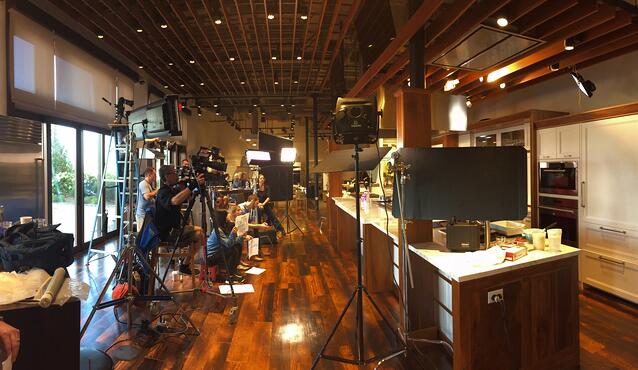 Local designers and residents who stopped into the Clarke Sub-Zero and Wolf Test Kitchen located at 7 Tide  last week might have thought they entered a television production studio instead of the newest design destination in Boston Seaport. Clarke’s newest showroom was recently chosen by Hood® as the production site for the company’s series of Holiday Recipe short programs that will be seen on CBS Boston/WBZ-TV during the 2016 holiday season. 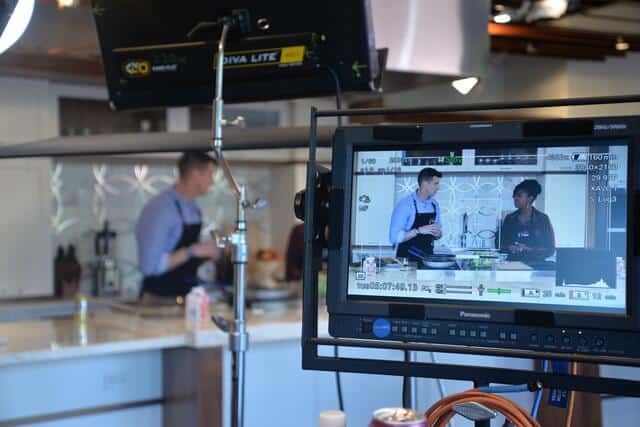 The “Hood Cream” segments, produced by CBS Boston, will feature Chef Chris Coombs of Deuxave Boston restaurant, along with Jocelyn Delk Adams, author of Grandbaby Cakes, an innovative cookbook based on childhood baking with her grandmother. The two guide viewers through innovative ways to incorporate Hood cream into delicious holiday recipes, which will be available in a special Hood e-cookbook. 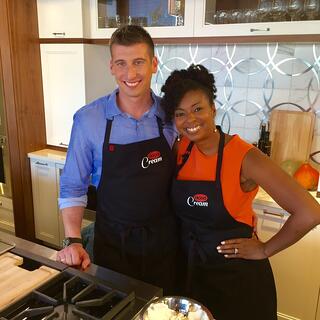 During five entertaining segments, Coombs and Adams used Wolf appliances to create Sticky Toffee Pudding, Brioche French Toast, Herb Pistachio Crusted Lamb, Lasagna and Pumpikin Bisque, all with a unique twist that centers on Hood’s various types of cream. For more than 160 years, the name Hood has been synonymous with fresh, quality dairy products that taste great. Founded in 1846 in Charlestown, Massachusetts by Harvey Perley Hood, the company has since extended its New England roots, and today Hood is a national company distributing dairy products throughout the United States.

Visitors and 7 Tide employees were astonished at the amount of lighting, cameras, production crew and preparation required for these segments. Production meetings and calls, technical rehearsals, food preparation and more all needed to fall into place to ensure the finished product communicates the ideal message about holiday cooking. 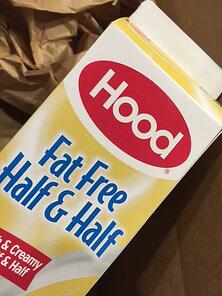 The Hood Cream series will be aired on WBZ-TV leading into the morning newscasts and additional product and recipe information will be distributed through newspaper inserts on November 20th throughout the greater Boston area.

The Clarke showrooms have often been selected as television kitchens for various projects including Chef Lidia Bastianich’s “Lidia’s Italy” series, Chef Ming Tsai’s various public television series, as well as pilots for varioius regional and national television cooking programs. Clarke’s showrooms have also been the subject of kitchen design and cooking segments on popular programs such as Chronicle and This Old House.

For more information on taking your own Test Drive at a Clarke showroom, click here.