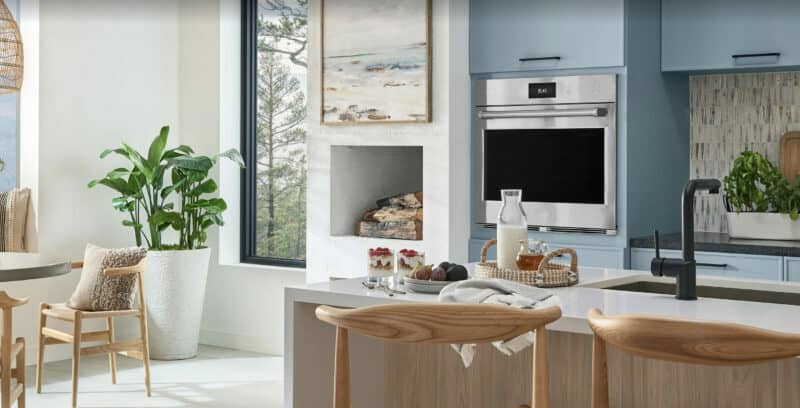 The Wolf E Series Oven arrived on the scene in 2007. In 2021, the E Series Oven was reimagined as one of Wolf’s Next Generation appliance stars, with its design features informed by every Wolf oven that came before it. If you are lucky enough to hear Clarke Founder and CEO Tom Clarke tell the story, you learn that Sub-Zero purchased the residential division of Wolf in 2000, to leverage the superior restaurant cooking technology for which Wolf was known. It was time for Sub-Zero to add cooking appliances to their line of best-in-class refrigeration so that discerning homeowners could rely on one company for all of their kitchen appliances.

“I was asked to join a panel of experts who were tasked with helping Sub-Zero design the first Wolf wall ovens,” says Clarke. “Sub-Zero brought in one of every type of wall oven that was on the market and set them up at their headquarters in Madison, Wisconsin, so we could see them and have chefs cook in them. We looked at the aesthetics, compared the features and tasted the results to curate the best-in-class combination of offerings for discerning homeowners and designers. This exercise informed the company as they began to design and engineer Wolf’s first residential wall ovens. It was an exciting time and it led to the launch of Wolf’s L-Series ovens in 2001, E-Series ovens in 2007 and M-Series ovens in 2015.” 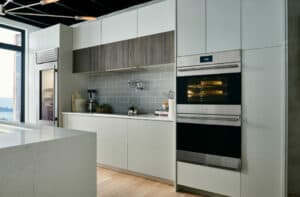 Each generation of oven offered something new and remarkable, building on new technologies and manufacturing capabilities. Over two decades, Wolf has continuously perfected the art of oven design and performance. Never resting on their successes, in 2021, Wolf introduced the Next Gen E Series Ovens.

The Next Gen E-Series Wolf Oven is now available in 30” widths in single and double oven options and can install flush into a 24” deep cabinet. These ovens are offered in both Professional and Transitional styling. The E Series upper Wolf oven now offers dual convection fans – each with its own heating element. This means even flow of both heat and airflow, eliminating “cold spots” and ensuring more consistent, more delicious results – even when using multiple racks at once. The lower oven offers extra space and versatility of a conventional oven. Many homeowners select the single oven and plan to install a Wolf Convection Steam Oven or Speed Oven as their second oven for even more versatility.

In one of the most significant updates, the Wolf E Series Oven now offers 10 cooking modes: bake, broil, convection, convection roast, dehydrate, gourmet, proof, roast, stone and warm. There are nearly 50 presets in Gourmet Mode, which takes the guesswork out of cooking. Simply select the dish, and Gourmet Mode walks you through the rest via the oven’s 7” full-color touchscreen: proper rack position, sets the cooking mode, even adjusts temperature while baking. It is your key to making perfect-every-time prime rib roasts, conquering chocolatey souffles, and whipping up meals without the worry.

The new Wolf E Series Wall Ovens are also wi-fi enabled. Homeowners can ensure their oven performs at its best by connecting it to the Sub-Zero Group Owner’s App. From the app, you can remotely control certain Wolf oven settings, set alerts and explore chef-created resources and recipes made especially for your oven. 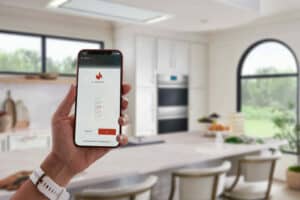 How Do I Compare Wolf’s New E Series vs. Wolf’s M Series Ovens?

Do you want a single oven or double? Have you considered pairing a single oven with a Wolf Convection Steam Oven or a Wolf Speed Oven? Pictures and words can only go so far in communicating the features and benefits found in Wolf’s new E Series Ovens. With new features like Gourmet Mode with its nearly 50 presets, this new oven sounds similar to Wolf’s M Series Ovens. 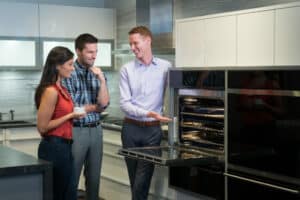 The best way to appreciate which Wolf wall oven is best for you is to schedule an appointment at your closest Clarke Showroom. Clarke, New England’s Official Sub-Zero, Wolf and Cove Showroom, offers the opportunity to see Sub-Zero, Wolf, and Cove appliances in full-scale kitchens and have all of your questions answered by an expert kitchen showroom consultant. As product experts, Clarke Kitchen Consultants also help you find your local authorized retail dealer and pave the way with details about what appliances and accessories you find most valuable. Schedule your kitchen showroom visit today.