And, here they are… 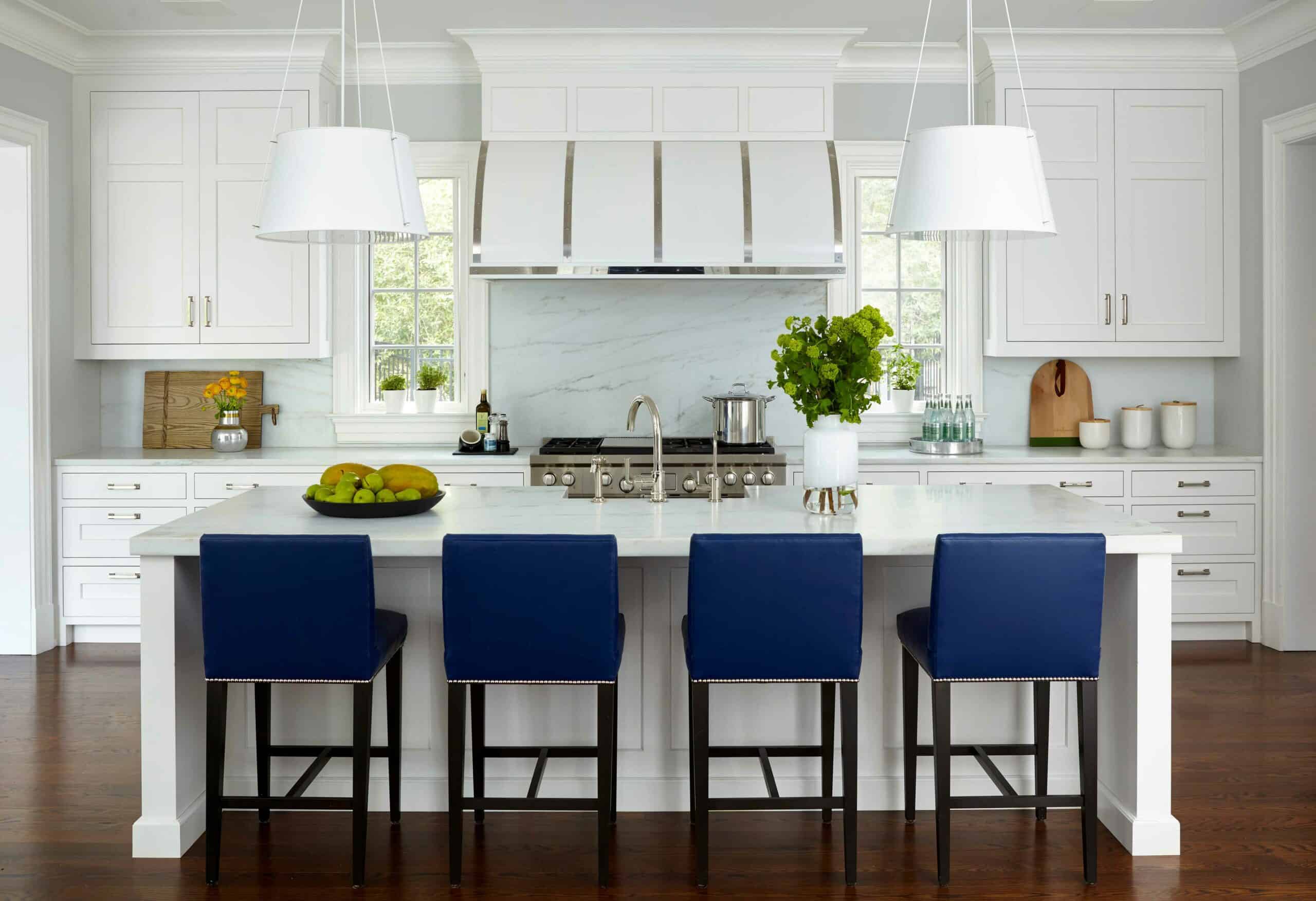 Veronica’s Manhasset Mainstream project caught the eye of our judges for combining ease of use, stylish design and carefully placing Sub-Zero and Wolf’s industry-leading kitchen technology. This kitchen was designed for a family with five children, so keeping clutter to a minimum and accommodating the needs of a large family were paramount. The homeowner’s top two design goals were to create “stations” for breakfast/coffee prep and beverages. They also wanted a bright, clean blue and white kitchen. 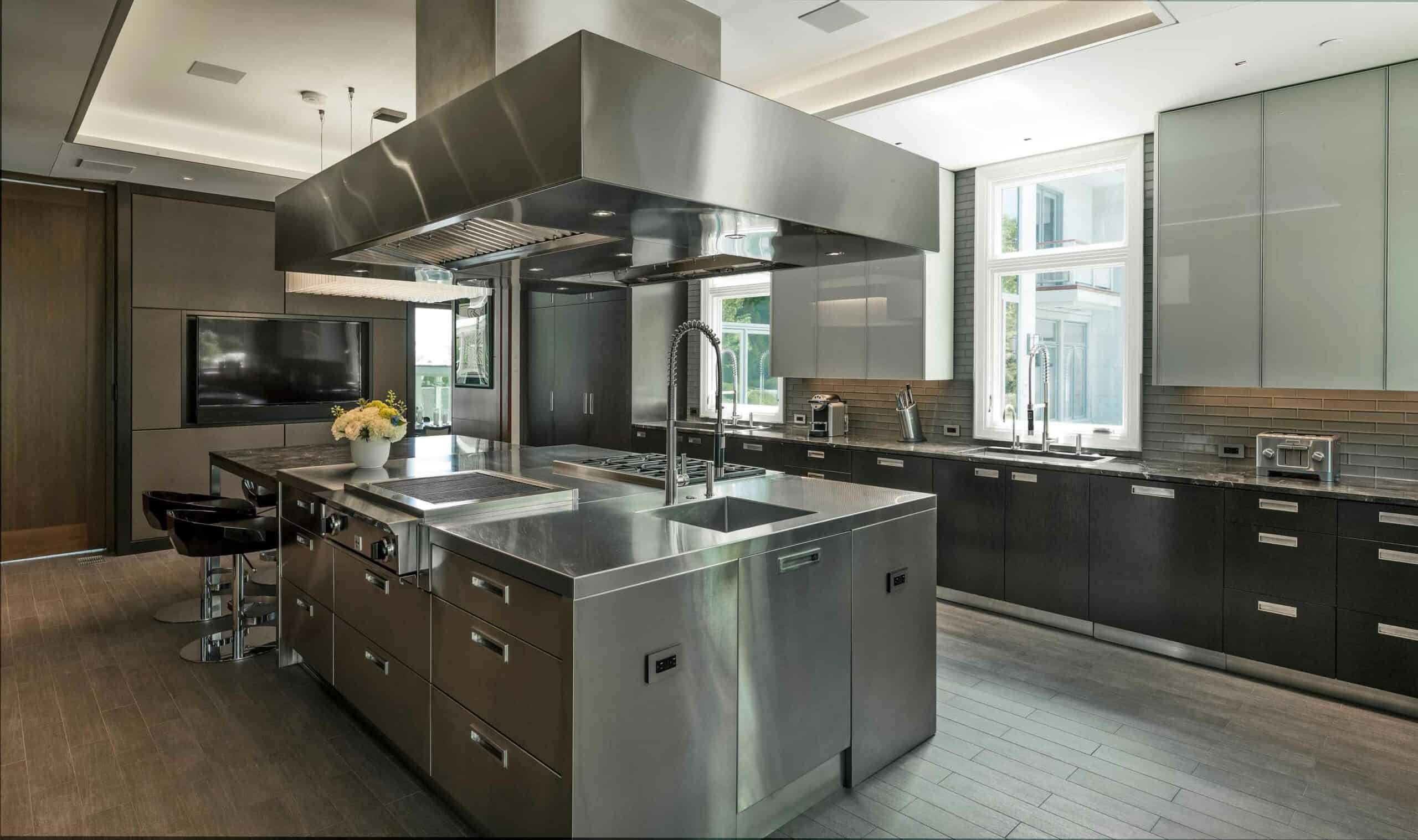 This stunning residential kitchen achieved this homeowner’s desire for a professional look. In this large space, Adolfo says his largest challenge was creating enough ventilation for the large Wolf burners and broilers. Combining stainless steel, dark wood lower cabinets and aluminum frame upper cabinets, Adolfo achieved his goal of finding a balance between the custom, fitted look of the cabinets and the professional feel of the stainless steel elements. 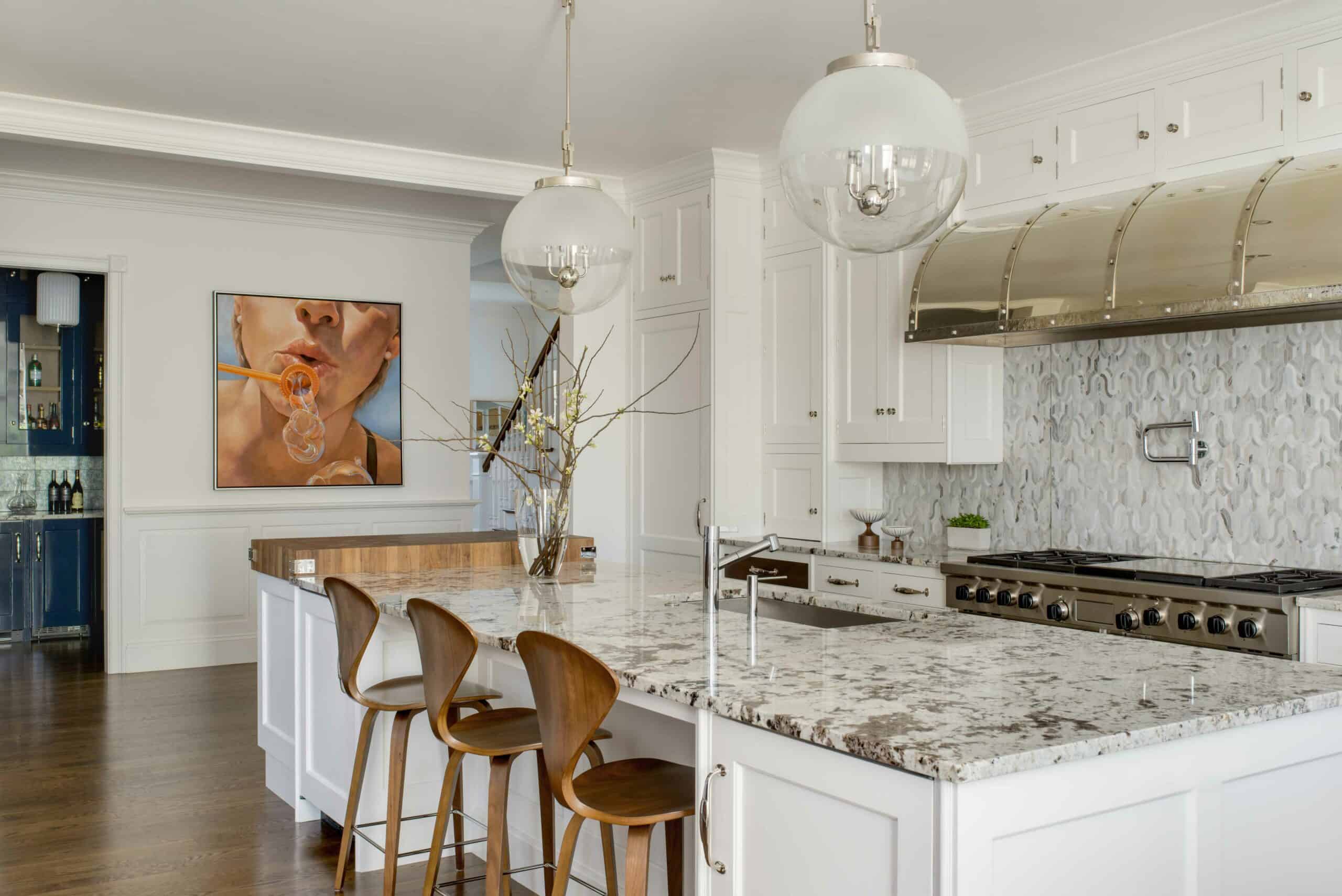 In her Suburban Sophisticate kitchen, Jodi met the needs of a homeowner who loves to entertain and wanted to have everything accessible to his guests while they are in his home. A rigid six-month timetable and a very involved client with exquisite taste and attention to detail were challenging and the waltz they did resulted in this beautiful space. Jodi paid special attention to not only blending the kitchen with the home’s architecture, but also adding unique details like oversized drawer pulls and a custom metal hood that made this white kitchen very special. Incorporating 10 Sub-Zero and Wolf appliances make this kitchen perfect for anyone who enjoys to cook. 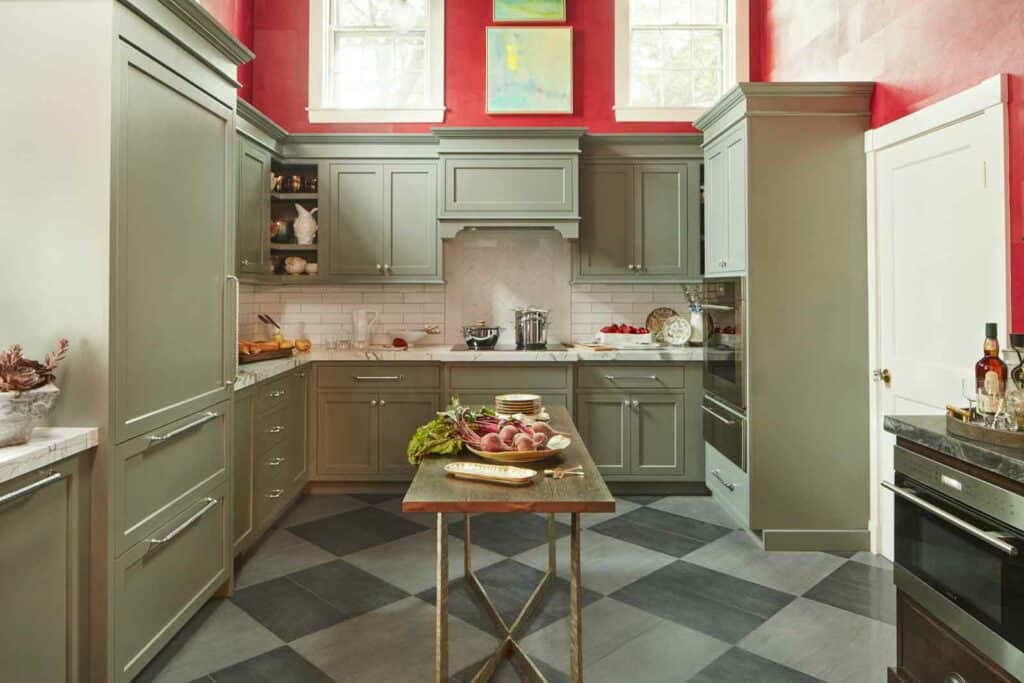 Vani’s La Belle Cuisine project was designed for the Junior League of Boston’s 2016 Designer Show House. While the cabinets and appliances were not required to remain in the home after the Show House, however Vani’s goal was to create and donate the complete kitchen to function as the catering kitchen for the building owner, the Newton Cultural Alliance, who planned to use the space for that use. The kitchen was not only spectacular looking, but also passed commercial grade catering kitchen requirements so that it could be used after the show.

She took a two-story dirt floor, unfinished room and created a French Bistro-inspired kitchen that fits perfectly within the historic nature of the house. 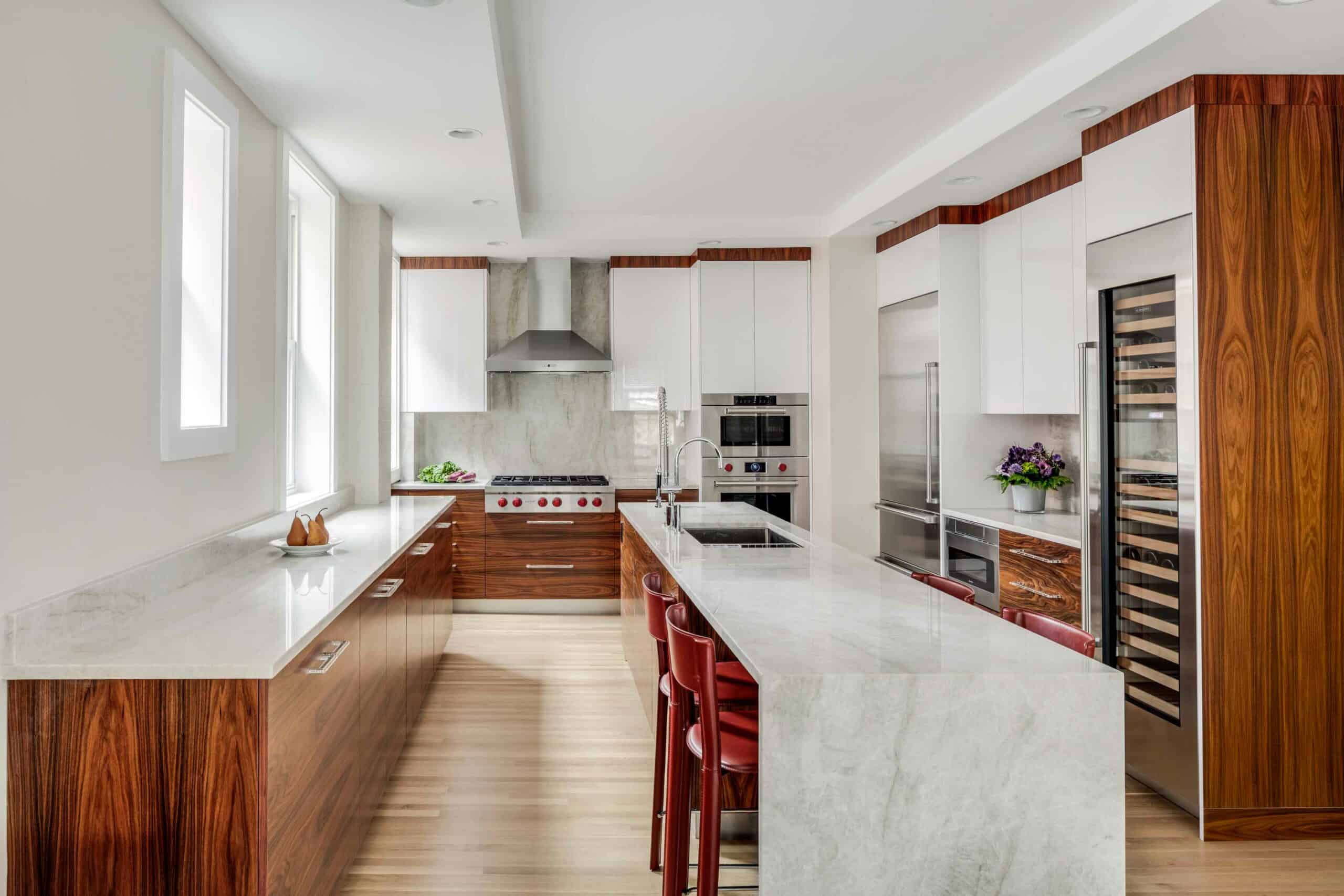 Pierre blended traditional Rosewood Veneer with a White High Gloss Lacquer, hardwood floors and Taj Mahal Quartzite to create a stunning contemporary result. His ability to blend the homeowner’s desire for a professional style cooktop in a contemporary space was beautifully executed, along with his overall design of this narrow space. It blends function and style with a gracious result. 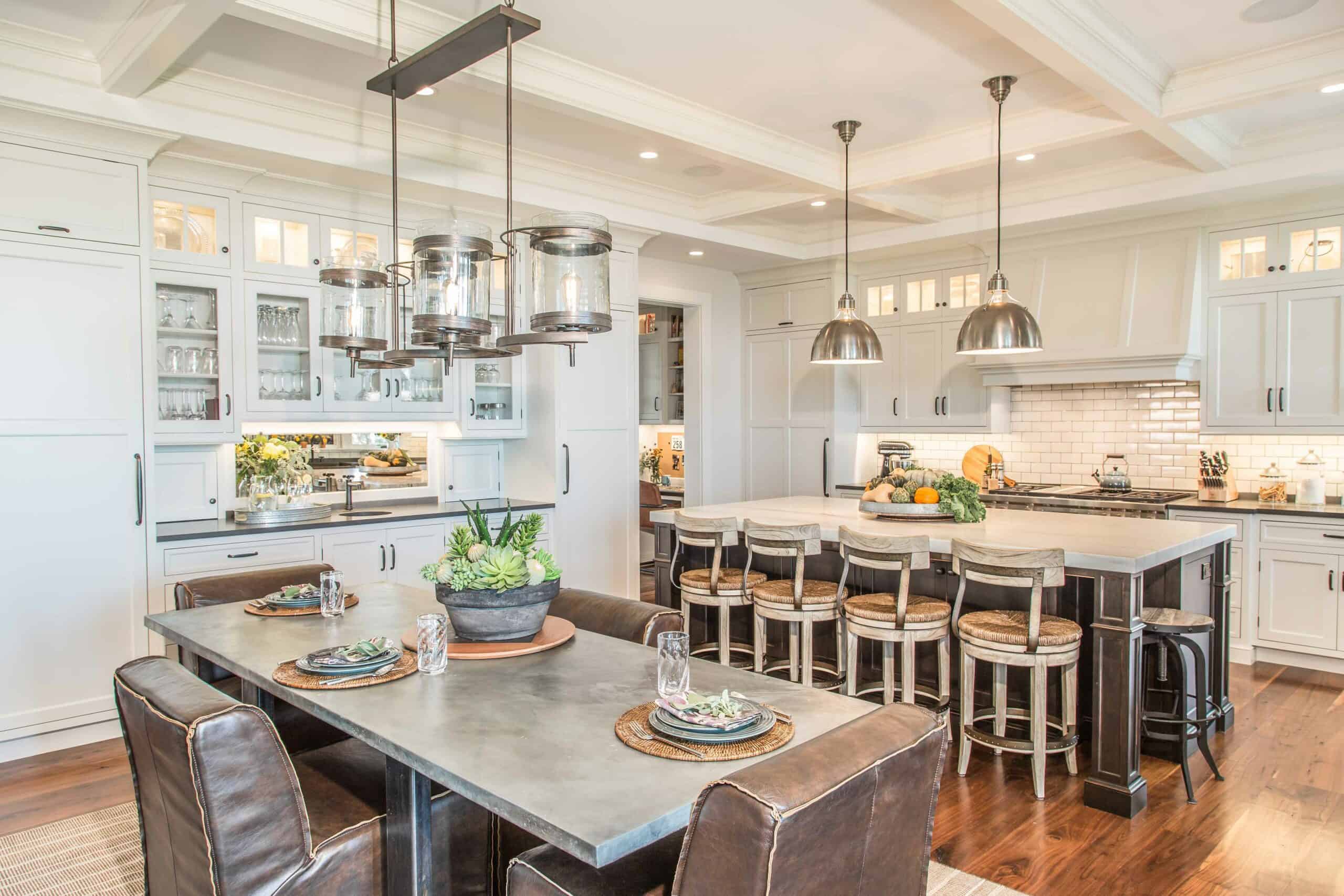 Gerard partnered with Kira Van Duesen and Pamela Ciccarello on a kitchen known as Relaxed and Refined, Elegant Meets Easygoing. When the homeowners decided to forego a dining room in their new construction waterfront home, the kitchen needed to be inviting with plenty of seating to entertain. The watchwords were livable, durable, comfortable and timeless. After the kitchen was completely designed, the architect and homeowners decided to push the exterior wall lout an extra two feet, which required redesigning with new challenges including keeping the weight of the perimeter cabinetry evenly dispersed. The end result is a space that feels natural and breathtaking at the same time. With all of the thought that went into the space, it still looks fresh and not contrived.

Congratulations to all of the winners and thank you to dozens more who entered their projects. We will enjoy sharing all of them in the coming months and invite designers and homeowners alike to visit a Clarke Showroom and Test Kitchen when planning your next kitchen project.