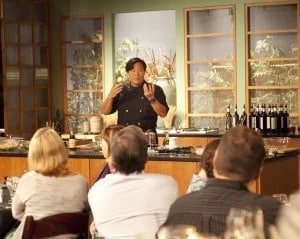 Emmy-Nominated Chef Ming Tsai shows Clarke how to cook! When Emmy-nominated Chef Ming Tsai offered a cooking event last month at our Milford showroom, the crowd of 60 guests were both enthusiastic and at ease, seeming as if they were all having a  personal conversation with the celebrated chef. Ming was extremely at home in his television studio kitchen at Clarke, where he’s cooked for his PBS for now nine seasons. He entertained the crowd with stories of being on “Iron Chef,” what it was like behind the scenes and said that the task of single-handedly creating the buffet for 100 people on the show might have been the hardest thing he’s ever done in his life.

For two hours, he whipped up selections from his One-Pot Meals cookbook, offering that when he cooks at home (without the luxury of sous chefs and dish washers), he likes to create things simply, and often using only one pot. “That’s real Chinese cooking, you know,” he said. “Less is more and you put together wonderful ingredients and then put the pot right on the table to serve the family.”

During the evening, Ming offered these morsels of culinary wisdom:

It was a delightful evening watching Ming in action and we look forward to having him back to The Clarke Culinary Center in 2012 to teach us more great secrets. Don’t forget to watch the new season of his PBS show, Simply Ming…Cooking on the Fly. In the Boston area, it can be seen Saturday afternoons on WGBH.