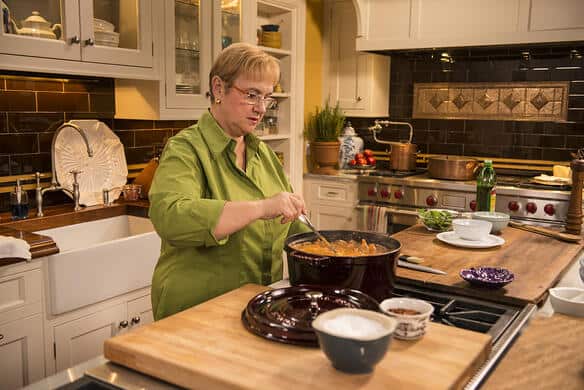 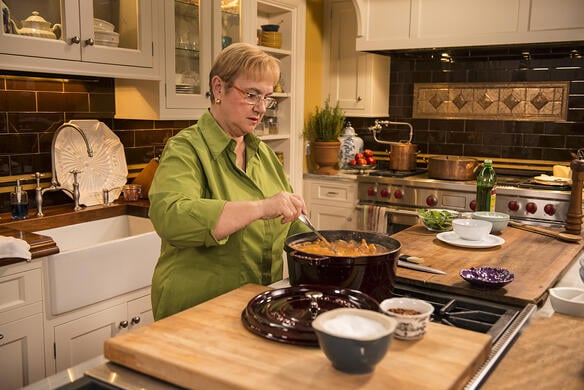 Genuine. That’s the one world everyone kept using when referring to Lidia Bastianich, one of America’s most beloved television chefs, as she recently taped her new public television series at Clarke’s Official Sub-Zero & Wolf Test Kitchen in South Norwalk, CT.

How does one become the television studio for a celebrity chef? Well, for Lidia, the decision for the location of “Lidia’s Kitchen” was particularly important. Every television show you have ever seen with her at the helm has been taped in her own kitchen in Queens, NY. Every year, the crew would take over her home (using just about every corner plus the prep kitchen upstairs in her mother’s home) for three weeks. After almost a decade, she decided there might be a better way to get the television show she wanted without abdicating every inch of her home to do so. 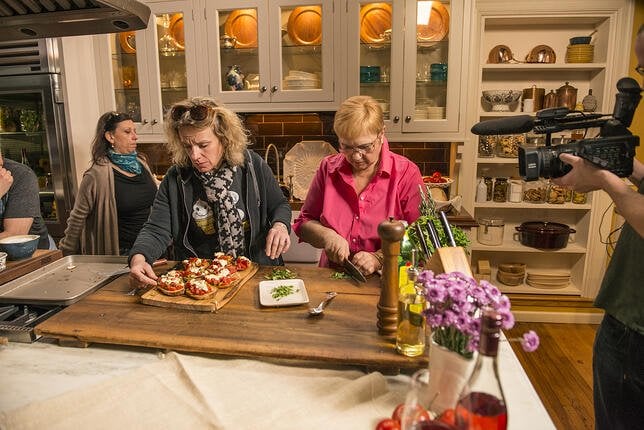 Her production staff started researching, then several crew members said they had worked on Chef Ming Tsai’s public television show in Boston, which is shot at Clarke’s Showroom and Test Kitchen in Massachusetts. Someone said, “I think Clarke has a Connecticut showroom in Fairfield County, maybe that could work.”And so the connection was made. 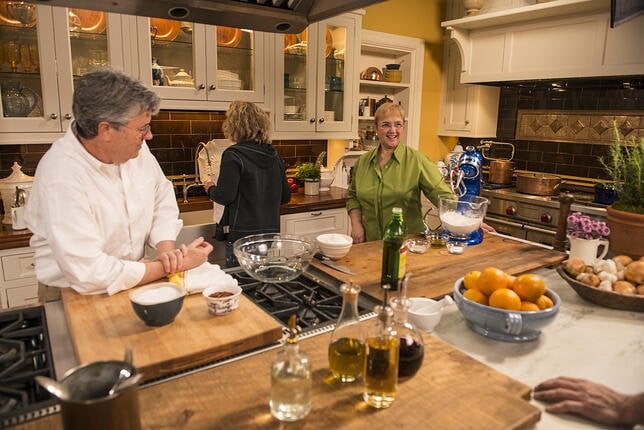 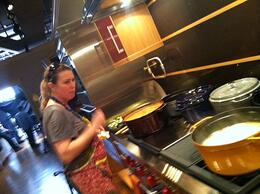 Lidia’s Supervising Producer Shelly Burgess Nicotra visited Clarke in SoNo with a few of the production team. They loved the space and sent Lidia a few photos. She loved what she saw and once she visited, she knew this was the new Lidia’s kitchen.

Sean Clarke and SoNo Showroom Manager Marco Barallon worked out the many details with Lidia’s organization. They agreed to a 9-day shoot, which meant organization was more than key. They taped 26 episodes in just nine days. They loaded amost 5,000-square-feet of dishes, props, linens and cooking equipment in the back door to the event space behind the showroom.

It was imperative that the kitchen was not only beautiful, but feel like a home. To that end, Lidia’s crew hung white French doors on the hallway opening next to the kitchen to make if feel more like her home. They closed the other doorway with shelves and created a kitchen pantry vignette. They filled the shelves with the pottery, pans, pantry supplies and more. They placed live flowers, potted plants, wine bottles, spices and cutlery on the island where Lidia would focus her attention.

Lidia’s crew is a well-oiled machine. While she was in Clarke’s test kitchen cooking and teaching her recipes to viewers on camera, her director, producer and other key members of her staff were sitting behind the test kitchen in Clarke’s wine storage office/media room vignette, which had three monitors, several tables and all eyes on the production unfolding in the other room. Over a loud speaker, the show’s director would call for quiet on the set and direct cameramen on headsets to position cameras to get the shot he wanted. 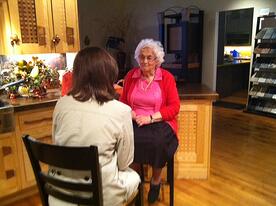 Out in the Clarke Showroom, the live kitchen vignettes were filled with prep chefs making dishes with Lidia’s recipes to be shown in various states of completion on camera. Every Wolf range, wall oven and stovetop was buzzing with Lidia’s chosen ingredients. Each show’s dishes were carefully labeled, so that nothing would slow down production. Each show took 2-3 hours to complete and  the crew completed three shows each day, a Herculean task when quality is of the essence.

Lidia is a pro, standing for a second to collect thoughts before rolling tape. No teleprompter, no scripts…just her sharing her knowledge with the viewers. It is no wonder she comes across so comfortable and genuine. She shares what she knows.There’s humor, there’s intensity and the feeling that she loves what she does is palpable.

During one of the nine days, Lidia was also gracious enough to host several press people brought in by Clarke. She posed for photos, did a quick news story for News12 and introduced her mother who also did interviews (she is a delight!) Despite the intense production schedule, Lidia insisted that getting the news out about the new show, premiering on public television in October, was key in her mind. 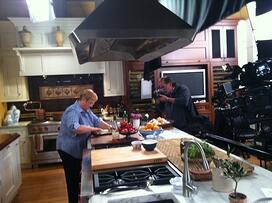 We look forward to Lidia’s fall premiere…check out http://www.lidiasitaly.com for details about times and stations, as well as updates on her many restaurants and great activities.

While accommodating these television shoots in our showrooms can take a lot of time and focus, the whole Clarke team believes that showcasing our Sub-Zero and Wolf kitchens in the hands of great chefs like Lidia and Ming is worth every bit of the effort! We are proud of being the kitchens of choice for these great cooks when it comes to their television shows and encourage everyone to enjoy their shows as their season start at up in the fall.